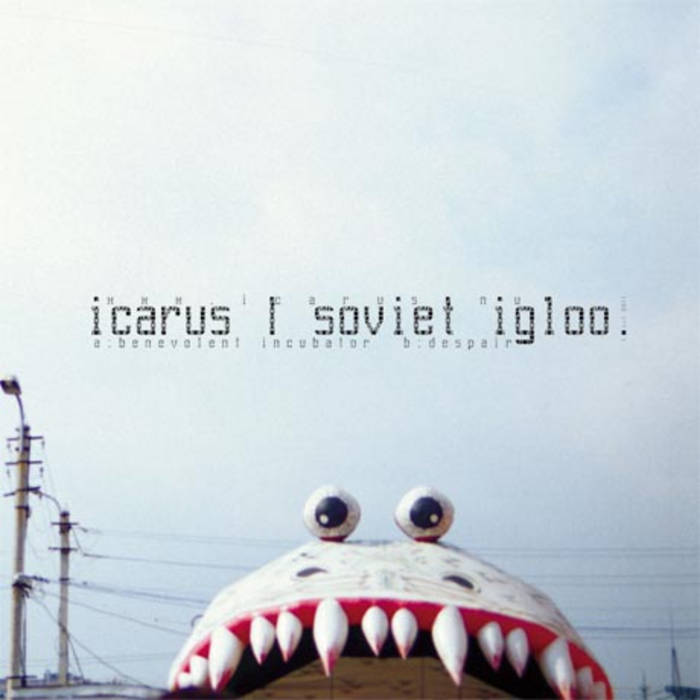 Soviet Igloo (it’s a mix of vodka and polar bear milk) is strangely new material from Icarus, following on from their last full-length album ‘Squid Ink’ and setting the scene for their next, ‘Misfits’.

Benevolent Incubator: a mellow blend of 3, 5 and 7 bar basslines,1, 3, 4 and 6 bar beats and 6 and 8 bar melodies, punctuated by strip-silenced cross-tempo percussion, re-slotted and aligned at the international jungle reference tempo of 175bpm. The melodies get going after a minute of the aforementioned percussion. From then on it’s a cross-rhythmic jelly, yet tight as a stone, more acoustic than digital, yet slightly less analogue than it is electronic. The fractal beat density is about average, with trivial fluctuations around the basic superimpositions, and a quite distinctive drop-off in the third quarter, to a lower-level beat shadow. Semantically it provides the listener with a pleasing sense that someone is playing big rusty metal drums real well, and another guy is counting 7s with unknockable certainty, but as the experienced reader will have guessed, this is a fairly straight-up trick in cutting edge non-real-time IA (that’s French for AI), and should not be taken entirely literally. No deception is spared in order to convince the listener that there is some sort of amazing improvisational interplay between individuals on this track, akin to the heyday of bebop or even weirder practices to be found at the The Klinker on a Thursday night.

Despair: dedicated to a book by Nabakov, which in its day cut edges into twiddling the dials of literary perspective. The construct is analogous to Side A’s Benevolent Incubator, applying a prime-numbered-bar bassline across variously looped beats and melodic patterns, all at a slower, more electronica-ballad type tempo. Once settled out of its mindclearingly lop-sided beginning, it does this cross-rhythm looping thing for a bit, and then ends. Calming indeed. Rumbling melodic basslines end in what sounds like an air-conditioner in overdrive and introduce the lament of ‘the slow death of Henry the Hoover swallowing balloons’. The beats are several stages removed from the kitchen sink, but derive from there nonetheless. If mixed by Jeff Mills, Despair could almost make a chunky floor shaker.

Igloo sees Icarus playing more musical games across the spectrum and, as has come to be expected, the results do not lend themselves to either the fashionable precedents of the dance floor or of the glitchcore electronic mafia. A dish perhaps best enjoyed without any stigma attached. You’ve heard it all before, but not like this.